Thank you for your patience while we retrieve your images.

VIOLATION: WI Statute 940.44
Intimidation
COMPLAINT: Two old guys in a 14 foot Alumacraft had set up shop for bluegills just inside the 15 foot weedline. They were doing pretty good on the gills and sunfish, though having to do a little sorting. But they weren’t too fussy anyway, and were really quite content with their results. Till Bertha finned her way in that is. Then all the panfish clamped their little jaws shut and sunk down into the weeds. They all had been witnesses to Bertha’s attacks before, and wanted none of it. Bertha stayed for a half hour or so, during which time the guys never had another bite. They finally left in disgust.
KNOWN ASSOCIATES: None. Bertha may not be pretty, but she is big. She doesn’t have to chase the others off when they come by. They know enough to just stay away.

BUY THIS POSTER>
© The Fish Watcher 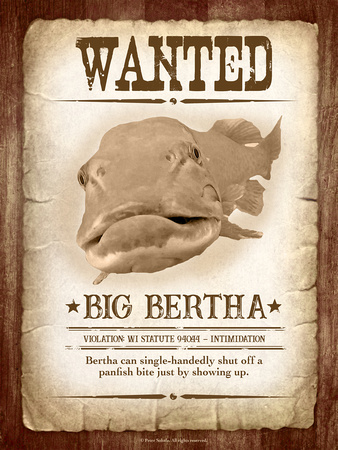